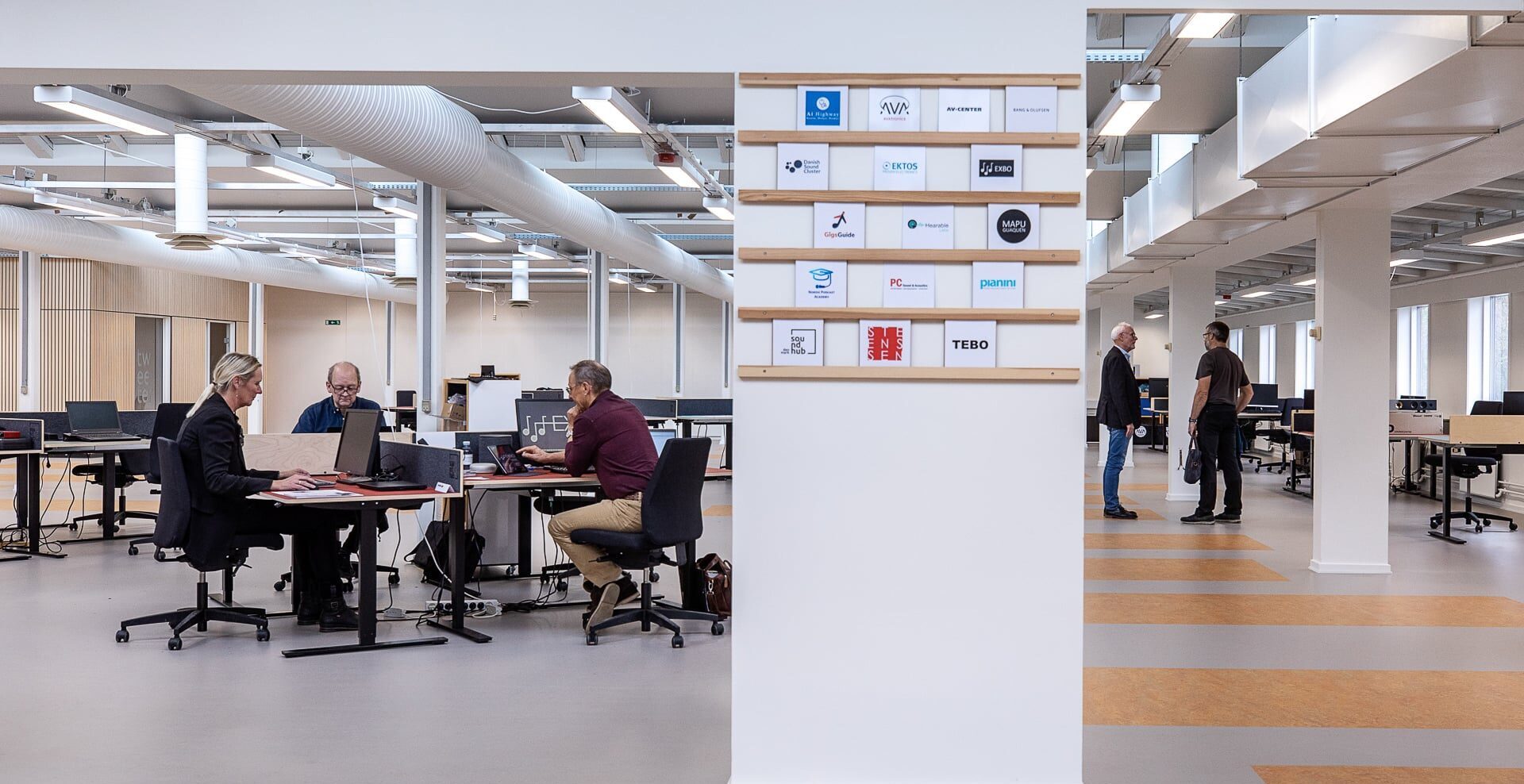 Status 2020 – Sound startups are beginning to settle in

The investment in sound innovation is beginning to show results:
The first 11 companies have emerged in Struer, which is now also the centre of a sound business cluster. Sound Hub Denmark is getting closer to critical mass.

Neighbours have noticed there is light in the windows in the former Bang & Olufsen factories at Peter Bangs Vej in Struer. This was also the idea behind the vision of establishing Sound Hub Denmark; generating business activity and new jobs, emerging from the city’s foundation, laid out by Bang & Olufsen a long time ago in Struer. A city, which is about to solidify its identity as The City of Sound.

Eleven companies have now established themselves here at the Sound Hub – eight of which are of foreign origin. They are all registered with a Danish legal entity, and the first Danish employees are hired in three of them.

It’s now just two years ago that the world’s first hub for sound innovation opened its doors for the first time. Nearly a dozen companies and few employees may not sound as much, but the significance of settling here is enormous. Imagine how the first telephone subscriber must have been rather bored until he got people to call. You have to start somewhere. Peter Petersen explains:

We are beginning to see the first organic growth.
By that we mean, we are getting calls from companies that want to be here, because they believe that our network and facilities can help them grow. Right now we are around 20 people here on a daily basis.
I’m convinced we will reach the 100 person mark, when we do status in two years’ time, because ‘birds of a feather flock together’, as they say,

The cluster will attract more companies

One of the new faces in Struer is Torben Vilsgaard, an engineer by education and director of the new business cluster Danish Sound Cluster. He explains:

The Ministry of Higher Educations and Science and The Danish Executive Board for Business Development and Growth have pointed out 14 clusters, and Sound is one of them. This means that sound is an area that Denmark sees as having a strong growth potential.

Danish Sound Cluster and Sound Hub Denmark will have several mutual goals. They will not be stepping on each other’s toes – on the contrary, they will make each other stronger:

The Sound Hub is first and foremost a locally initiated and internationally oriented start-up initiative, whereas Danish Sound Cluster is a national initiative to primarily create a connection between university-level research and the industry, and in this way stimulate innovation in the companies.

Torben is the first of four employees in the business cluster. The cluster will have its headquarters in Struer, but with an office location in Copenhagen to be close to some of the high-tech companies in e.g., the hearing aid industry. An industry, which has a billion Danish kroner (DKK) turnover and exports more than 90 per cent of its products.

A stamp of recognition

Peter Petersen from Sound Hub Denmark is pleased with the sound business cluster having its headquarters here.

We feel it is a recognition of Sound Hub Denmark, and we are proud of this. We will be working together on the common goals and some events, and other joint initiatives.

Corona is, unfortunately, blocking many conferences and events, but the Danish Sound Cluster expects its more extrovert and public debut on a larger webinar in a couple of months.

Our ‘Status 2020’ is an article from the original source (in Danish): Dagbladet Holstebro Struer made on February 22nd, by the Erhverv+ journalist: Thomas Maxe.
Status 2019 can be found here.